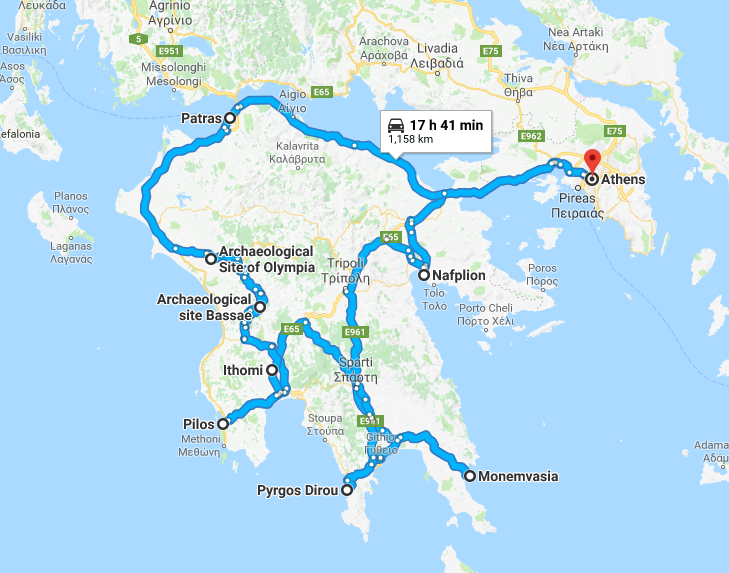 Day 1: ATHENS SIGHTSEEING & SUNSET TOUR AT CAPE SOUNIO TOUR: You will be picked up from your hotel for a private Athens City Tour. You will visit the most popular sights of Athens, such as the Parliament, University, Library, the Presidential Residence (Ex-King Residence), Panathineum Stadium (where the first Olympic Games took place in 1896), the Temple of Zeus, and finally you will visit Acropolis, the Parthenon and the New Museum of Acropolis. Afterwards, you will visit the second most popular sightseeing of Athens, (especially during the afternoon hours when you can take the chance of the breathtaking sunset over the Aegean Sea!). Cape Sounio and Temple of God Poseidon! Sounio is noted as the site of ruins of an ancient Greek temple of Poseidon, the God of the sea in classical mythology. The remains are perched on the headland, surrounded on three sides by the sea. Late in the afternoon we will back at your hotel. Overnight in Athens.

Day 2:  ATHENS - MYCENAE - EPIDAURUS - NAFPLIO: Early in the morning we depart and driving along the mainland coast from Athens to Peloponnese, we reach one hour later at the Canal of Corinth (6 km length and 80m height) where we will have our first stop for photos or for a coffee. Next site that we will visit, is the Ancient Theatre of Epidaurus, one of the best Ancient Theatres worldwide with amazing acoustic. Also we will visit the archaeological site of ancient Mycenae, a town with great power during the ancient years, where you can see the famous “Gate of Lions” and “Atreus King Tomb”. Our next destination is Nafplio, one of the most romantic towns in Greece, that was the first capital city of Modern Greece. We will have time for lunch at one of the traditional local restaurants and to explore the narrow streets of the beautiful city of Nafplio. We will visit the Castle that has 857 stairs from the town to the fortress, or you can take a taxi boat to visit the fort in the small island of Bourtzi, located in the middle of the city’s harbor!  Overnight in Nafplio.

Day 3: NAFPLIO - MYSTRAS - SPARTA – MONEMVASIA: After your breakfast we leave Nafplio to reach the nearby glorious Byzantine town of Mystras at about 2 hours later. Walk around the Upper and the Lower Town of the castle city, and sense through the silence the city's sheer grandeur: the Palace of the Despots (Anaktora), the Houses of Laskaris and Frangopoulos, the beautiful Cathedral of Saint Dimitrios and the impressive Monasteries of Our Lady Pantánassa, and of Οur Lady Perivleptos. Afterwards, we can have lunch at a local restaurant, and finally we will visit the second famous Tower Town of Peloponnese, Monemvasiá, a mystical stone-built settlement, nestled at the edge of a big rock by the sea, that was founded by the Byzantines in the sixth century. Peer into the history of the fortress –the so-called “Gibraltar of the East”. Taste culinary delights at a fine restaurant on the roof of a tower house. Overnight in Monemvasia.

DAY 4: MONEMVASIA: Today we suggest you to explore the old town of Monemvasia is a perfectly preserved medieval settlement still inhabited, an world cultural heritage monument and a major attraction for every traveller in the Peloponnese. It has a unique, magical atmosphere and a fascinating history. Monuments and churches are scattered throughout the old town. An important archaeological collection is housed in the old mosque in the Square of Elkomenos Christos. At the other end of the causeway on the mainland is the new town of Monemvasia. Along the coast to the south is the settlement of Nomia. Neighbouring Aghios Ioannis is recommended for those who would like to try authentic local dishes. Overnight in Monemvasia.

Day 5:  MONEMVASIA - CAVES OF DIROS - PYLOS: We leave Monemvasia, and driving along to the southern coast of Peloponnese we will arrive at Caves of Diros, which is famous for its marvelous subterranean caves as a part of an underground river. About 5,000 meters have been exposed and are accessible by small boats through narrow passageways and one is surrounded by formations of stalagmites and stalactites. Afterwards, we will reach at the beautiful village of Koroni that you can have a visit at the castle of Koronis. We leave Koroni to reach Pylos for overnight.

DAY 6: PYLOS - DAY AT LEISURE: Today we suggest you to enjoy your siwmming at VOIDOKILIA Beach, that is not only one of the most beautiful beaches in Greece, but maybe also in the Mediterranean Sea. It is surrounded by a magnificent beach of light, fine sand, protected by the wind, and the crystalline beach invite somone to go swimming. The beach of outstanding beauty lies beneath the Old Frankish castle  and the cave of King Nestor, the ancient King of Pylos, who according to legend, used this cave as a haven for his cattle.  Overnight in Pylos.

Day 7:  PYLOS - ANCIENT MESSENE - VASSAE - TEMPLE OF EPIKOURIOS APOLLON -OLYMPIA: After your breakfast we wiil pick you up from your hotel to reach at  Ancient Messene at about 1 and a half hour later. The ancient Messene is a spectacular archaeological site, a UNESCO monument which combines diverse beauties as it is built at the one side at the Messenian valley. The city was founded on the 4th century  B.C. by Epaminondas. We leave from ancient Messene early in the midday to reach at  Vassae at about 2 hours later. In ancient Figaleia, at an elevation of 1.130 metres, stands the eternally proud temple of Apollo Epikurios. The inspiration behind its construction and the architect is considered to be the great Ictinus. This universal architectural gem was the first of the great monuments of Greece to be recognized by UNESCO as a World Heritage Site in 1986. The temple was built at the height of the Greek civilization in the second half of the 5th century BC (420-400 BC). We leave from Vassae to reach at  Ancient Olympia 2 hours later. Check in at your hotel and free time for yourself. Overnight in Ancient Olympia.

Day 8: ANCIENT OLYMPIA - ATHENS: Early in the morning we will  pick you up from your hotel to visit the archeological site of Ancient Olympia, which lies in the lush valley formed by Alfios River, where the first Olympic Games took place in 776 B.C. You can also visit the Temple of Zeus, the most celebrated sanctuary of ancient Greece. Phedias had created the gold and ivory statue, dedicated to Zeus, which was housing one of the 7 wonders of the Ancient world. Then see the temple of Hera, the shrine of Pelops (one of the oldest in the sanctuary), the Council house where the athletes took the Olympic oath, the Treasury houses, the Gymnasium and the Palestra, where they used to exercise for a month prior to the Games. Finally you will visit the stadium, where the marble starting blocks are still in position. Olympia became the most important religious and athletic centre in Greece. Its fame rests upon the Olympic Games, the greatest national festival and a highly prestigious one world-wide, which was held every four years to honor Zeus. We will make a stop for lunch and relax and early in the afternoon you will at Athens.