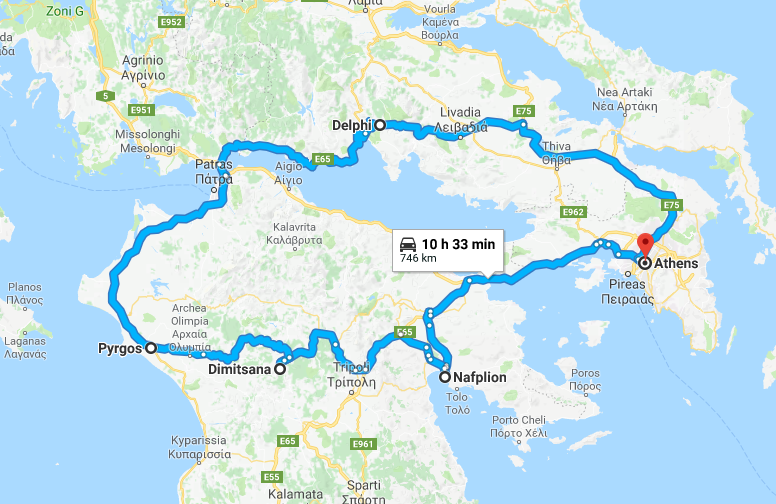 DAY 1: ATHENS  -ARGOLIS - NAFPLIO: After your breakfast departure from your hotel late in the morning and driving along the mainland coast to Peloponnese, we will have our first stop, 1 hour later, at the Canal of Corinth (6 km length and 80m height). Soon we reach at the Ancient Theatre of Epidaurus, one of the best Ancient Theatres worldwide with amazing acoustic. Our next visit will be in the archaeological site of Mycenae, an ancient town with great power during the ancient years, with the famous ‘’Gate of Lions’’ and ‘’Atreus King Tomb’’. We will stop for lunch or a coffee break, at one of the most romantic and beautiful towns of Greece, the seaside town of Nafplio. You can have a traditional lunch there and then a walk next to the coast. You can explore the beautiful old city of Nafplio as it has a wealth of narrow alleyways and streets, steep stairs, taverns serving delicious Greek food, lively cafés, a lovely seafront promenade, and enough sights, also you can relax in the central square and look at the playful children, couples, friends and families enjoying food, wine or frappé (Greek coffee).

DAY 2 : NAFPLIO - VILLAGE OF DIMITSANA: Today you can visit the Castle of the Town, with the 999 steps (!) and the amazing view, or take a taxi boat to visit the small island of Bourtzi, in the middle of the city’s harbor, the fort on the sea and Nafplio’s trademark! At noon we will leave from Nafplio to reach at the beautiful and historical Viallage of Dimitsana, which is located on two facing hills “Agia Paraskevi & “Castro” above the River Lousios. After your check in you can have a romantic walking tour in the narrow streets of Dimitsana, you will travel in its historical admiring the beautiful architecture and historical sightseeing. Visit the library and folk museum which is housed in the municipal school building and opposite the church of “Agia Kyriaki”. There you can see the statue of Patriarch of Constantinople Gregory V. Do not forget to visit the open air water-power.

DAY 3: DIMITSANA - LOUSIOS GOGRE & MONASTERIES– ANCIENT OLYMPIA: After your breakfast we leave from the hotel and after 20 minutes’ driving we will reach the start of the path that leads to the Monastery of Agios Ioannis Prodromos that it was built in 19th century. About after 20 - 30 minutes walking you will reach the Monastery, and admire the wonderful view to Lousios River under your feet! The monks will help you and show you how to continue walking in the Lousios Gorge and visit the next Monastery of Philosophos, one of the oldest monasteries in Greece that was built on 963 the old monastery and on 1691 the new one. Afterwards you will walk again to the point that you will meet our driver. We will reach during the afternoon at Olympia.

DAY 4: ANCIENT OLYMPIA - DELPHI:  After breakfast we will pick you up from your hotel to visit the archaeological site of Ancient Olympia, which lies in the lush valley formed by Alfios River, where the first Olympic Games took place in 776 B.C. You can also visit the Temple of Zeus, the most celebrated sanctuary of ancient Greece. Phedias had created the gold and ivory statue, dedicated to Zeus, which was housing one of the 7 wonders of the Ancient world. Then see the temple of Hera, the shrine of Pelops (one of the oldest in the sanctuary), the Council house where the athletes took the Olympic oath, the Treasury houses, the Gymnasium and the Palestra, where they used to exercise for a month prior to the Games. Finally, you will visit the Stadium, where the marble starting blocks are still in position. Olympia became the most important religious and athletic center in Greece. Its fame rests upon the Olympic Games, the greatest national festival and a highly prestigious one world-wide, which was held every four years to honor Zeus. Leaving Ancient Olympia, we will cross over the amazing bridge of Rion – Antirion, one of the biggest in Europe, in order to reach at Nafpaktos, a beautiful seaside small town, where you can visit the Venetian Castle, the Venetian Port, and after lunch we will reach at Delphi.

DAY 5: DELPHI - ATHENS:  Our first stop that it is worth to visit will be at the wonderful Byzantine Monastery of St. Loukas or at the Monastery of St. John Theologos.  Continuing we will visit Castalia Spring, visit at the archaeological site and view the monument of the Argive Kings, the treasury of the Athenians, the Athenian Stoa, the Polygonal Wall, the monument of Platea and  the Temple of Apollo famous for its oracle and  Delphi Museum, with its spectacular exhibits include the frieze of the Treasury of the Sifnians, the Naxian Sphinx, the Statue of Antinoos, the metopes of the Athenian treasury, the famous bronze Charioteer, originally created to commemorate a victory during the 476 B.C. Pythian Games, and many other artifacts. Afterwards, you can choose (as it is your private tour!) the next place that we can visit for coffee or lunch break, the village of Arachova (at 1000 meters altitude), the best winter resort of Greece, or the small town of Itea, a beautiful and traditional place next to the sea!