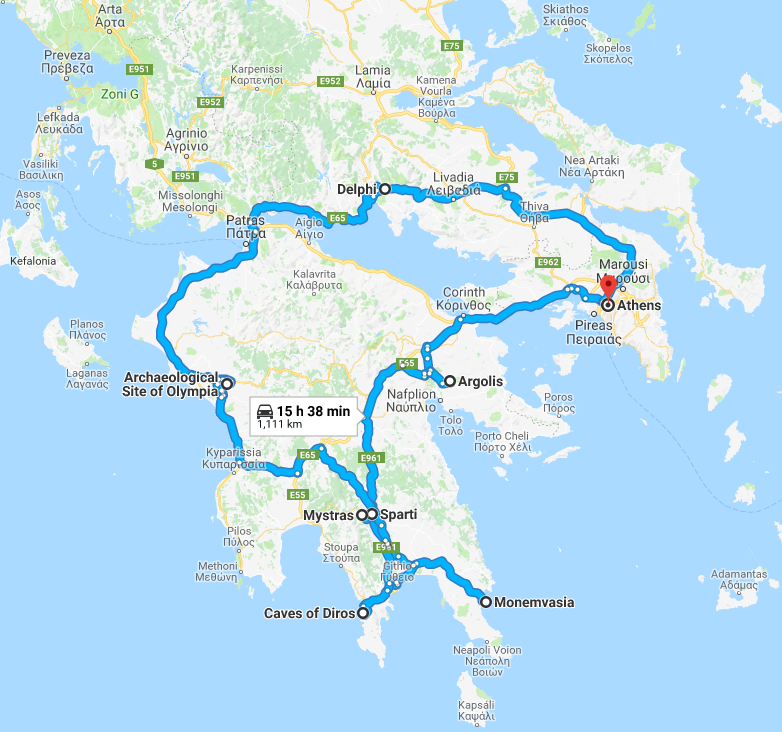 DAY  1 : ATHENS - ARGOLIS - SPARTA: Departure from Athens and driving along the mainland coast to Peloponnese, we will have our first stop, 1 hour later, at the Canal of Corinth (6 km length and 80m height). Soon we reach at the Ancient Theatre of Epidaurus, one of the best Ancient Theatres worldwide with amazing acoustic. We will stop for lunch or a coffee break, at one of the most romantic towns of Greece, the seaside town of Nafplio, first capital city of Modern Greece, and then we will continue to the archaeological site of Mycenae, an ancient town with great power during the ancient years, with the famous ‘’Gate of Lions’’ and ‘’Atreus King Tomb’’. Our first day will be finished at the famous town of Sparta.

DAY 2 : SPARTA - MYSTRAS - MONEMVASIA - SPARTA: During our second day we will first visit the unique Museum of Olive Oil of Sparta, a great Museum showing the unique history of olive production in Greece. We continue to the nearby glory Byzantine town of Mystras and let yourself be captivated by this destination’s medieval splendour. Wander around the castle city the Upper and the Lower Town, and sense through the silence the city's sheer grandeur: the Palace of the Despots (Anaktora), the Houses of Laskaris and Frangopoulos, the beautiful Cathedral of Saint Dimitrios and the impressive Monasteries of Our Lady Pantánassa, and of Οur Lady Perivleptos. Afterwards, we visit the second famous Tower Town of Peloponnese, Monemvasia, a mystical stone-built settlement, nestled at the edge of a big rock by the sea, that was founded by the Byzantines in the 6th century. Peer into the history of the fortress –the so-called “Gibraltar of the East”–, which was occupied by the Byzantines, the Crusaders, the Venetians, and the Turks in the past. Wander around its narrow cobbled streets, the Upper and the Lower part of the town, and admire the beautifully restored stone buildings. Taste culinary delights at a fine restaurant on the roof of a tower house. Late in the afternoon we return in Sparta.

DAY 3 : SPARTA - ANCIENT OLYMPIA: After our breakfast we leave Sparta and after a short stop at the picturesque small coastal town of Gythio, we arrive at Areopolis and Diros, famous for its marvelous subterranean caves as a part of an underground river. About 5,000 meters have been exposed and accessible by small boats and through narrow passageways and one is surrounded by formations of stalagmites and stalactites. Caves have served as places of worship in Paleolithic and Neolithic times and their inhabitant believed that the caves were the entrance to the underworld. We can also visit the local museum and then we continue to some of the most beautiful places of Southern Peloponnese, the coastal villages of Stoupa and Kardamili, for swimming or lunch. We pass by the town of Kalamata and we finally arrive at Ancient Olympia.

DAY 4 : ANCIENT OLYMPIA - DELPHI: After enjoying your breakfast we will pick you up from your hotel to the archaeological site of Ancient Olympia, the place that first  Olympic Games took place in 776 B.C., lies in the lush valley formed by the Alfios River. There is a temple of Zeus the most celebrated sanctuary of ancient Greece. Dedicated to Zeus which in antiquity was housing one of the 7 wonders of the Ancient world, the gold and ivory statue of Zeus, which Phedias had created. Then visit the temple of Hera , the shrine of Pelops (one of the oldest in the sanctuary), the Council house where the athletes took the Olympic oath, the Treasury houses, the Gymnasium and the Palestra where they used to exercise for a month prior to the Games. Finally, we will admire the Stadium, where the marble starting blocks are still in position. Although secluded near the west coast of the Peloponnese, Olympia became the most important religious and athletic centre in Greece. Leaving Ancient Olympia, we will cross over the amazing bridge of Rion – Antirion, one of the biggest in Europe, in order to reach at Nafpaktos, a beautiful seaside small town, where you can visit the Venetian Castle, the Venetian Port and after lunch we will reach at Delphi.

DAY 5: DELPHI – MONASTERY OF SAINT LOUKAS - ATHENS: Early in the morning depart from your hotel to visit Castalia Spring, then visit at the Archaeological Site and view the monument of the Argive Kings, the treasury of the Athenians, the Athenian Stoa, the Polygonal Wall, the monument of Platea and  the Temple of Apollo famous for its oracle and  Delphi Museum, with its spectacular exhibits include the frieze of the Treasury of the Sifnians, the Naxian Sphinx, the Statue of Antinoos, the metopes of the Athenian treasury, the famous bronze Charioteer, originally created to commemorate a victory during the 476 B.C. Pythian Games and many other artifacts. The next visit will be at the wonderful Byzantine Monastery of St. Loukas. The Monastery of Saint Loukas is an 11th century monastery. This monastery is the epitome of the Byzantine architecture while it is also included in the UNESCO World Heritage list. Afterwards, the village of Arachova (at 1000 meters altitude), the best winter resort of Greece for coffe or lunch at the traditional taverna, before to return to Athens late in the afternoon.