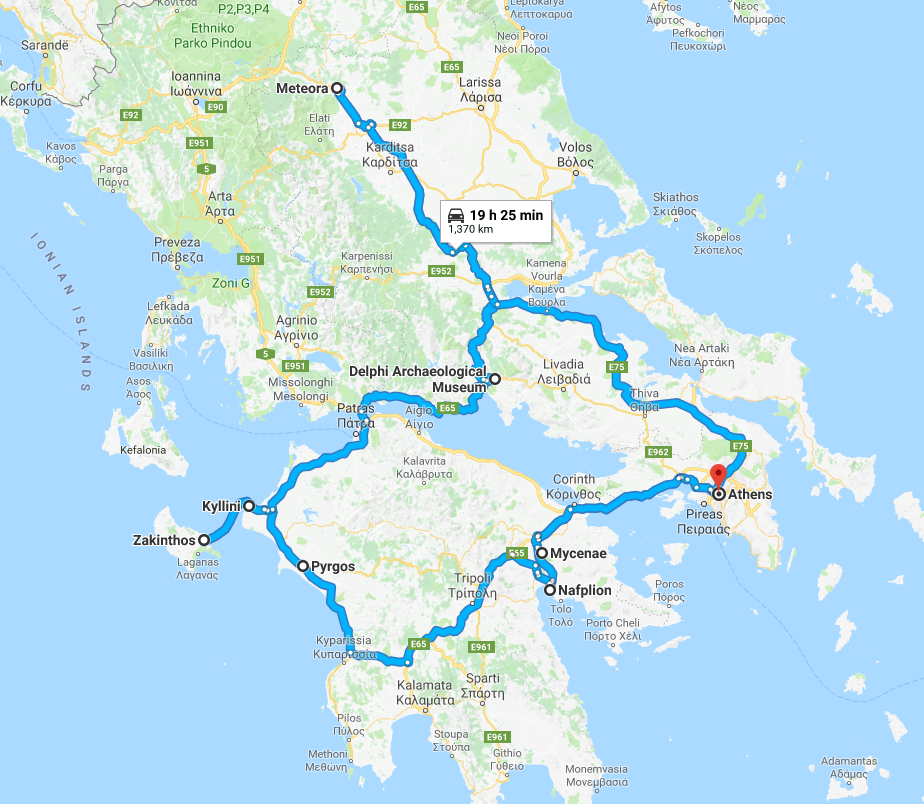 DAY 1: ATHENS - ARGOLIS: Pick you up and driving along the Attica coastline we will visit the Ancient Theatre of Epidaurus, after a quick stop at the famous Canal of Corinth with the breathtaking view of 80m height and 6km length! Our next stop will be at one of the most beautiful towns of Greece, Nafplio, with its trademark, the Venetian fortress of Palamidi and the fortified islet of Bourtzi afloat in the middle of the bay. After our stop for lunch or coffee, we will visit the famous ancient town of Mycenae and the Archaeological site - the Lion Gate, the Cyclopean Walls, the Palace and the tomb of Agamemnon. We leave Mycenae to arrive at Ancient Olympia, birthplace of the Olympic Games.

DAY 2: ANCIENT OLYMPIA - ZAKYNTHOS ISLAND: Pick you up from the hotel to visit the archaeological site of Ancient Olympia, the place that first Olympic Games took place in 776 B.C., lies in the lush valley formed by the Alfios River. There is a temple of Zeus the most celebrated sanctuary of ancient Greece. Then visit the temple of Hera, the shrine of Pelops (one of the oldest in the sanctuary), the Council house where the athletes took the Olympic oath, the Treasury houses, the Gymnasium and the Palestra where they used to exercise for a month prior to the Games. Finally come to the stadium, where the marble starting blocks are still in position.  After sightseeing in Olympia, we go ahead to Kyllini Port to take the ferry depart about 15.15 to reach Zakynthos port about 16.15 (after 1 hour). Check in at your hotel and then day at leisure. After your rest you can explore Zakynthos and to have a dinner at  traditional restaurants.

Day 3: ZAKYNTHOS ISLAND - DAY CRUISE AROUND THE ISLAND: Transfer you to Zakynthos Marina to take the local boat cruise as is one of the best ways to explore the island. The boat cruise depart 09:00 and returns about 17:00. We will visit the Blue Caves and the Shipwreck. We spend 1 1/2 hours here in order to enjoy your swim. Then we will have a photo stop at Porto Vromi, that our boat pulls up next to the Agalas Caves and the Keri Caves.  A big photo stop includes the Turtle Island. The whole gulf of Laganas and Kalamaki are full of turtles swimming in the seawater. Our other major swim stop is in the area of St Nickolas, Basilikos where the boat anchors for about an hour. At the and of the cruise tour our driver picks you up and transfers you at "KERI" area to admire the panoramic sunset tour and to have a delicious dinner. After all you will be transfered back to your hotel. TOUR BY CAR IF THE CRUISE CAN'T TAKE PLACE: Pick you up from your hotel to have our first stop at Alykes, where you can see the salt marshes and admire the view to the north western part of the island. We will visit Volimes, one of the oldest villages on the island. There you can buy traditional, handmade embroidery and other products, made by the local women. The peak of this tour is the Shipwreck, the most famous beach of Greece! We will admire the panoramic view of the Shipwreck (Navagio Beach) from the top of a cliff above the bay. Next stop is the village of Maherado, where we will visit the church of Saint Mavra. The next stop will be at the gulf of Laganas called the Turtle Island. Finally we have a traditional lunch in a tavern, with delicious dishes and local wine before our return to the  hotel.

Day 4: ZAKYNTHOS ISLAND - DELPHI - METEORA: After your breakfast we will take the ferry from Zakynthos port depart at 08.00to reach at Kyllini after 1 hour about 09.00 to continue the tour to Delphi. We will cross over the amazing bridge of Rion – Antirion, one of the biggest in Europe, in order to reach at Nafpaktos, a beautiful seaside small town  for a short stop to have a coffee admiring the Venetian Castle and the Venetian Port. After that we will reach at Delphi. We will visit the Ancient Oracle, the Stadium, the Ancient Theatre where could seat more than 5000 spectators and of course the Museum of Delphi, where you can admire the ‘’Charioteer’’, one of the best bronze statues ever! Afterwards, we can visit and have coffee or lunch at the most famous winter resort in Greece, Arachova (a traditional and at the same time modern small city in an altitude of 1000 meters)! Depart from Arachova and driving through Central Greece and the city of Trikala (quick stop), we arrive at Kalambaka, a small traditional town that is built at the foot of the majestic grey rocks of God, at the shadow of the great Meteora Monasteries.

DAY 5: METEORA - ATHENS: Visit to Meteora enjoying a unique and most impressive scenery of ageless monasteries, containing priceless historical and religious treasures, standing between Earth and Sky atop huge rocks. We visit the first great monastery of Varlaam, founded on the 16th century and located on the top of a rock at 380m height! Our second visit will be at the Monastery of St. Stephan, of the 15th century, also built on the top of another huge rock where you will admire a small treasure of Byzantine and Christian items at the museum inside the monastery! Return to Athens passing by the small towns of Domokos, Kamena Vourla at the seaside and Thermopylae where there is the statue of Leonidas as a memorial of the battle of the 300 Spartans against thousands of Persian soldiers of the Persian Empire. Return in Athens late in the afternoon.